“When the righteous are in authority, the people rejoice; but when the wicked rule, the people groan” (Proverbs 29:2).

“It is important to realize that the present eclipse of authority represents the greatest among the reversals that have come to pass in history” (Agosto del Noce, “The Crisis of Modernity”).

These two terms, “authority” and “power,” are often used interchangeably among us to mean the same thing. To ask “Who is in power here?” is often the same thing as to ask “Who is in authority here?” It has been a standard trope of many modern ideologies to “question authority,” by which is meant to be resistant in the face of coercive power. One of the dogmas of the Critical Theory so prevalent among us is that all human relationships are fundamentally about hegemonic power. The word “authoritarian” has been coined to describe a personality or a regime that oppresses others and destroys human freedom. According to this way of thinking, authority is the enemy, and we will gain our freedom by destroying all expressions of it.

But to merge the concept of authority with the exercise of coercive power is a serious mistake with grave consequences. Not only are authority and power not the same thing; they are almost complete opposites. Authority is the basis of human freedom. Coercive power tends to suffocate freedom. Understanding the difference between authority and power and their relationship to freedom is essential for negotiating our current spiritual and social environment.

Humans are inherently social beings, and therefore always need to arrive at a way of ordering their common social world. Those who have been assigned special responsibility for that ordering – people like parents, political leaders, pastors, teachers, and bosses on the job – are said to be “in authority.” They often hold recognized positions that enable them to exercise their authority. The word “authority” comes from the Latin augere, which means “to grow.” For the whole of the Graeco-Christian tradition, to be in authority has meant to be given responsibility for ordering common life such that everything under that authority can find its proper place and grow to its proper maturity. The etymology is significant. A good gardener exercises authority over his garden by getting to know the nature of his plants and by arranging them such that they are well-watered, protected from pests, and enabled to grow into their mature form. The garden then grows beautiful and useful. A gardener who would try by sheer force to get the garden into a preconceived shape without regard for the individual qualities of his plants, their mode of growth, the soil, sun, and water they required, would not be exercising genuine authority, and nothing much would grow. He would end up killing a lot of his plants and would probably end by paving the whole area with asphalt to save himself the painstaking trouble of real gardening. The same process can be seen happening among humans. Totalitarianism is the asphalt stage of human gardening.

Authority is most itself when it is not joined to coercive power. Our language still recognizes this sense of the word. We invite people to a lecture that we think will interest them because our speaker is an “authority” in his chosen topic. We pay attention to the recommendation of an intelligent physician because she knows what she is talking about; she speaks with “good authority.” In both cases the influence is freely granted because there is a recognition of something inherent in the person who bears the authority that provokes our respect. This quality was pre-eminent in Jesus. “When Jesus finished these sayings, the crowds were astonished at his teaching, for he taught them as one who had authority, and not as their scribes” (Matthew 7:28-9). Jesus was not coercing his hearers; they recognized something in him that demanded their allegiance.

Where does that allegiance, that consent to genuine authority, come from? The idea of authority is intrinsically tied to universal truths about God, the cosmos, and the moral order, and cannot exist without them. True authority is never an arbitrary thing; it is ultimately founded on truths that transcend humanity. Those who exercise authority properly know this to be true, and carry out their responsibilities on the basis of those higher transcendent truths. Even Christ, whose divine nature possessed inherent authority, taught us this principle. He once said to his followers, "I can do nothing on my own authority; as I hear, I judge; and my judgment is just, because I seek not my own will but the will of him who sent me" (John 5:30). God is the ultimate source of all genuine authority. God is all goodness, all truth, and all life. Under his life-giving authority, everything grows, matures, becomes itself, and is filled with the goodness and radiance of the Divine Being. Perfect freedom is the quality that comes about under God’s exercise of authority. Humans in positions of authority are participants in God’s authority, and are meant to reflect God’s concern for leading those under their authority with the truth, goodness, and life that comes from God. They never do this perfectly, being morally flawed themselves. But we should be clear that failures in human leadership are a departure from authority, not an expression of it. Again, consider Christ. He is the perfect example of the relationship of authority and coercive power. He is the most authoritative human who has ever lived. How often does he coerce his listeners or his followers?

When someone in authority makes a moral appeal, such as a demand for justice, kindness, or generosity, we are moved to agree because we recognize the truth of what is being said. When a person in authority cites a demonstrable fact or makes a reasonable argument, we follow along because we accept the rules of logic and the consequences of facts. Parents teach their children right and wrong and expect their children to obey because the moral law they are handing on impinges on every human, and has a natural appeal to the human mind and spirit.

In a fallen world coercion is sometimes by necessity joined to authority, because the order of goodness and justice so needed by common life is regularly resisted by morally flawed humans. The unfortunate reality of the Fall has provided the ground of the political traditions of every human grouping, as they have grappled with the conundrum of trying to arrive at a just and harmonious social order made up of people who are constantly unjust and disharmonious. There is no need for a science of politics in heaven. It is therefore a task of first importance for any society to educate its members in the ways of genuine authority – authority founded on transcendental realities - and to find means of addressing misuses of authority. But true authority uses force only reluctantly. The need for force emerges only when the authority of truth and goodness has been unrecognized or flouted. Responsible parents who are leading their families by transcendent truths understand this dynamic. Things work best when their children recognize their care and trust their guidance. Only when a child begins to act badly does some form of coercion enter the picture, and then only reluctantly, for the sake of the family’s common life and the proper growth of the child.

One of the sad ironies of recent history is the prevalence of the idea that we can become free only if we find a way to abolish God, and thereby do away with the limitations that impinge upon us as creatures. The reverse is the truth. Recognition of transcendent truths is the very basis of human freedom. What is the result when God’s authority is rejected in principle by individuals or social bodies, and the universal order of truth and goodness is overthrown? The only instruments that then remain for ordering the common life are persuasion and coercive force. Persuasion unsupported by transcendent truth is never able to bring about the agreement necessary for societal harmony, and in its absence quickly degenerates into manipulative and hegemonic rhetoric in the interests of a power-seeking minority, a process skillfully portrayed in Orwell’s famous novel 1984. When arbitrary persuasion and propaganda fail to bring about unity, a failure that always occurs, brute force inevitably makes its entrance. The atheist is a totalitarian by necessity, even without wishing to be. A society founded on the destruction of a cosmic order of truth rooted in the Divine will inevitably produce a state of oppressive force by its own inner logic. There are many recent examples of this kind of coercive societal development, often contrary to the original intentions of those who have “seized power.” The harsh totalitarianism of Soviet Russia or Nazi Germany was not an add-on to their philosophies; there was no way for them to avoid it. The soft totalitarianism of many modern progressive ideologies is just as inevitable. Even those who do not intend to erect a social system based on brute force will find that there is no avoiding it. The exercise of power divorced from genuine authority is a foretaste of hell.

We are thus faced with a basic principle of social life. To throw out all “meta-narratives,” to insist that there is no such thing as “truth,” to mock universal moral values, to claim that there is no normative human nature, is to walk an inevitable road to slavery under a regime held together by coercive power alone. The free person is the person under genuine authority, protected by transcendent truth. The slave is the person under no authority, constrained by arbitrary human power.

“Jesus then said to the Jews who had believed in him, ‘If you continue in my word, you are truly my disciples, and you will know the truth, and the truth will make you free’” (John 8:31-32).

More in The Search for Truth

While 'studiositas' is a strength of mind, the mind infected by the often-misunderstood vice of 'curiositas' in one way or another blinded to the truth of real things. 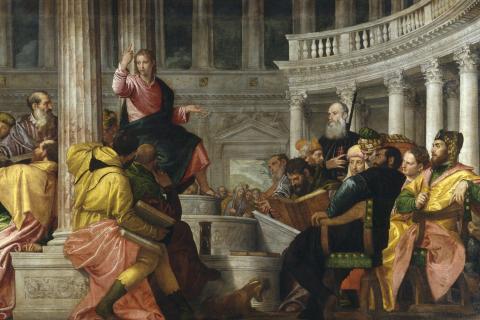 All in The Search for Truth