“At midday I [Paul] saw on the way a light from heaven, brighter than the sun, shining round me and those who journeyed with me. And when we had all fallen to the ground, I heard a voice saying to me in the Hebrew language, ‘Saul, Saul, why do you persecute me? It hurts you to kick against the goads.’ And I said, ‘Who are you, Lord?’ And the Lord said, ‘I am Jesus whom you are persecuting’” (Acts 26:13-15).

Why the Church? Why do we need it? Why do Catholics put so much emphasis on being a member of the Church? It is a question that comes up often. No one doubts that every human grouping needs a way to organize: from national governments to chess clubs, people get themselves into some kind of order for the sake of a common activity. But for Christians, the Church is much more than a society of like-minded individuals, and that demands an explanation. In our anti-institutional age, it is easy to think that it is best to minimize the visible structures of things. Many people describe themselves as “spiritual, but not religious,” as being not interested in “organized religion.” The idea behind this stance is that the nuts and bolts of organization and administration tend to stifle the religious spirit and lead to useless and often problematic bureaucracy. “Better to stay with the heart of things,” this mentality says, “and leave behind anything that isn’t ‘spiritual.’”

In answering the question, “Why the Church?,” it will help to start with what is at first an odd fact about the founder of Christianity. Jesus of Nazareth is the most famous figure in human history. When one considers the number of his followers, the geographical and cultural extent of his reach over two thousand years, the numbers of books, works of art and music, buildings, societies, and organizations that have been inspired by him and have been called by his name, a reasonable conclusion emerges that among many great and influential humans, Jesus is the most influential person who has ever lived. On the surface, this seems easy enough to brush over: “Someone has to be the most famous person in history, after all. Why not Jesus?”

This is where we encounter something strange, at least from a human point of view. Most of the famous people of history accomplished certain impressive things upon which their continued fame and influence rests. There are those who were great soldiers and empire-builders like Alexander the Great, Julius Caesar, Genghis Kahn, and Mohammed, who also founded a religion. There have been strong-willed rulers like Augustus Caesar, Henry VIII, Catherine the Great, and Napoleon. There have been great thinkers and poets whose books we still read, such as Homer, Aristotle, Buddha, Confucius, Shakespeare, and Dante. There are people who have fashioned beautiful works of art like Michelangelo, Bernini, and Beethoven. There have been great scientists who have changed the world such as Isaac Newton, Marie Curie, and Albert Einstein, and explorers who opened up new possibilities like Leif Erikson, Columbus, and Magellan.

Against such famous and accomplished figures, consider the life and the accomplishments of Jesus. He never won a battle, never conquered a territory or ruled a kingdom; he wrote no books and left no monuments or works of art; he made no rare discoveries. He died while still a young man, and, short as his life was, he spent most of it in complete obscurity. His public life was very brief – three years or less – and during that time he never traveled beyond a small region of the world or outside the bounds of one small ethnic people. The means by which most people have become famous hardly touched him at all.

Having redeemed us by means of the cross, God then established a society in the midst of a darkened world – a kind of colony of heaven that he inhabits and with which he clothes himself.

What, then, did he do? What has allowed his continued influence to span the centuries and the continents? The unlikely and unexpected answer is that he founded the Church. He left behind him a living body of believers. Not a club of people who share similar interests with a name like “The Jesus of Nazareth Association for Salvation, Spirituality, and Wholeness.” Rather, a remarkable body with its own organic life, the strength of which did not come from the efforts of its human members, but from the divine presence of the Holy Spirit.

The Church is absolutely unique among human institutions and organizations. It is not only a human thing, but, like Christ himself, it is both human and divine. The Church is unique because in a sense it is Christ himself. It is his “body” of which he is the “head.” When Saul of Tarsus, that zealous Pharisee, was aggressively attacking the followers of Christ, Jesus waylaid him on the road and threw him to the ground. He then confronted him with the question: “Saul, why are you persecuting me?” He didn’t say: Why are you annoying my followers or disrupting my underlings? He identified himself intimately with the society he had founded. To attack the Church was, literally, to attack Christ.

We are thus brought to a remarkable truth: the Incarnation, the act by which God took on human flesh, did not end when Jesus rose from the dead and ascended into heaven. Jesus continues to live incarnate among us, now not in an individual human body, but among and within a body of believing disciples by the presence of his Holy Spirit. The New Testament often speaks of the Church this way. To become a disciple is to be a branch attached to the vine of Christ (John 15:5), a living stone built into a spiritual temple (1 Peter 2:5), a member of a single body (1 Corinthians 12:12-27). That is why St. Cyprian, as early as the third century, said, “No one can have God for his Father who does not have the Church for his mother.”

To encounter the Church is to encounter Christ himself, veiled within a human form.

More in The Church 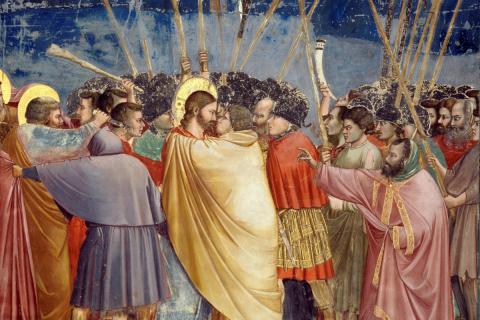 The Scandal of the Church

Can the Church really be Christ's body, inhabited by the Holy Spirit, when there is so much sin and weakness among its members?

All in The Church